Tanya Scott was a main cast member on Little Women: Atlanta. She was a guest star on two episodes of Season 2, and joined the cast on Season 3. She did not return for Season 5, but was a guest on Season 6.

Tanya Tehanna Scott was born on June 13, 1993. The type of dwarfism that Tanya has is Pseudoachondroplasia. Before she was on Little Women: Atlanta, Scott lived in Virginia Beach, Virginia. She was an exotic dancer before she became pregnant with her first child. When she found out that her son Jaidan is a little person, she wanted to

help him maintain his health, so she became an herbalist and started her own health and wellness company called, "Life Body Naturals". One of the reasons why Tanya moved to Atlanta was to expand her business.

Tanya has been a guest on The Rickey Smiley Morning Show, a syndicated radio show that was co-hosted by her former fellow Little Women: Atlanta cast member Shirlene "Ms.Juicy" King Pearson.

Before being on Little Women: Atlanta, Tanya was already friends with fellow cast member Monie Cashette. Tanya has three children: Jaidan (8), and Luna (6), and Tahirih (4). All three of Tanya's children have Pseudoachondroplasia.

In July 2017, Scott released an ebook titled, "Bridging the Gap".

Tanya dated Devon Neal, who is the father of her daughter, Luna. The two probably first started dating in 2014 (at least), but broke up at one point. The two rekindled their relationship in 2017, but broke up again. Before Devon was on the show, he lived in Maryland, and Tanya would send both of her kids to stay with him for weeks at a time since they had a loose custody agreement. 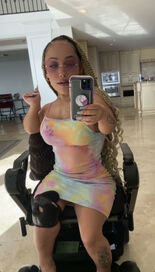 Later on in Tanya's third pregnancy, Devon agreed to move to Atlanta so that Tanya's kids wouldn't have to travel back and forth from Atlanta to Maryland. Neal also moved in with Tanya to help take care of her kids.

Tanya has a YouTube channel by the name of "Your Favorite Herbalist", where she shares more footage of her life, and info about natural healing techniques and herbs.

In 2018, she released another ebook titled, "The Mama Travel Guide".

Scott had a role on a show called "You're My Boooyfriend" on the streaming service called Zeus.

Community content is available under CC-BY-SA unless otherwise noted.
Advertisement